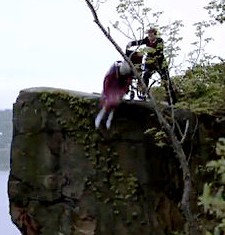 o the left (from YouTube) is from an ad created by the Agenda Project. The ad states, “Now, Republicans want to privatize Medicare,” as it shows a man wheeling an elderly lady up a cliff, against her will, and then dumping her over the edge.

The Republican plan, put forward by congressman Paul Ryan, does not affect anyone over 55, which rules out most elderly “Grandmas” as depicted in the ad. It also tries to responsibly address the fact that Medicare, as it presently exists, is broke, and a plan such as Ryan’s will be required to save Medicare. This is exactly the opposite of the message conveyed in the ad.

Creating and running an ad designed to scare the elderly, and doing so by blatantly lying, is despicable. Therefore ET awards its Shameful Behavior award to the Agenda Project, and its founder, Erica Payne.